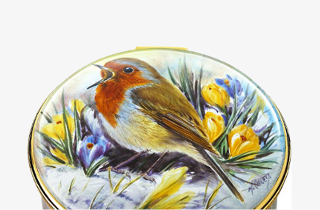 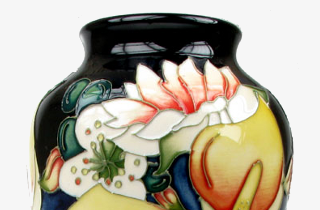 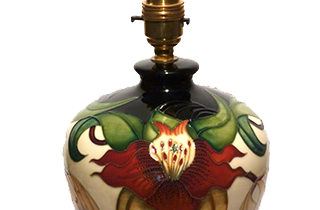 Claris's was situated in a beautiful Grade 1 listed property in Biddenden Kent. We arrived in 1984 and our philosophy has always been keep it simple do it well. We changed the office to a shop selling handmade quality items from our friends on the Craft Fair circuit. Claris's tearoom continued, winning many awards and gaining an enviable worldwide reputation. We stopped serving teas at the beginning of 2012. Claris's shop soon established itself as a retailer of fine china, glass, teddy bears and unusual gifts. In 1990 we began to stock the wonderful Moorcroft Pottery which is hand made in Stoke on Trent. We very quickly became a significant retailer and in 1996 we held the first of many successful Moorcroft events. It was attended by John and Jill Moorcroft and the event vase was “Bryony” on the 7/5 shape. Kingsley Enamels were added to our list of suppliers in 1995. Moorcroft bought Kingsley in 1998 and launched Moorcroft Enamels in 1999 with a new collection. We continued to stock these very successfully until Moorcroft closed the company in 2005. Elliot Hall Enamels was launched a year later to become the leading freehand painted enamel manufacturer, which it still is to this day.

Brian & Janet continue to sell online. We offer a minimum of 25% discount from the retail price and many pieces have been further reduced, use the sale search feature to see these. All with free UK delivery